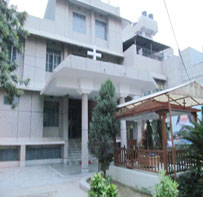 St. Paul Province, Delhi is an offshoot of Alvernia Province, Irinjalakuda which had its  first mission centre at Vidisha,  M.P in the Eparchy of  Sagar in 1979.   Late  Mother Breezia was the  first Mission Superior.  Under her efficient guidance and support of mother Province ,the mission flourished to different dioceses of North India.    In 1987 the mission was raised to the status of Region.  Sr. Rosalind was appointed as the first Regional Superior with 73 members and 11 convents.  The Regional House was at Vidisha, M. P.   Later the region was raised to the position of a Vice Province on 17th Dec. 1994   with 91 members and 12 convents and the Vice Provincial House was shifted to Palam,  Rajnagar , New Delhi in 1995.  And on 4th Dec. 1997 the Vice Province was declared a Province by Rev. Mother Marianna, the Superior General.   Mother Abraham was elected Provincial Superior.  After the construction of new building with better convenience, the Provincial house was shifted to Mahavir Enclave, Palam, New Delhi .